In 1991, the club started sponsoring this race in honor of Art Keay, a veteran racewalker and Toronto policeman. He loved the sport and
continued to compete until he was well into his eighties. People who lived along the route that Art Keay followed still remember having seen
him. Creating an annual event seemed to be an appropriate way in which to recognize a true sportsman and provide a venue for current and
future racewalkers.

This event includes the age-graded 10 K Art Keay Memorial Racewalk and a 5 K Non-Championship Race which are open to all. This year,
10 K Ontario Senior Men’s and Women’s Championship Races, 10 K Ontario Junior Men’s and Women’s Championship Races and a 20 K
Racewalk are also scheduled to take place. The Ontario Championship races are available to OTFA members who are residents of Ontario,
and the 20 K is only for those able to complete it in under 2 hours. These events attract competitors from Canada and from the United States.
Plaques, medals and ribbons are awarded, and there are prizes to be won. See some photos of the 2004 race!

Where It Takes Place

Race participants take a short ferry ride to Hanlan’s Point, which is on an island in the Toronto harbor. They are rewarded with a spectacular view of the Toronto skyline. The race takes place on a 2.5 K loop on a wide paved path on the island. Starting time is 11:00 a.m.

Find our about the Ferry service to the race site. 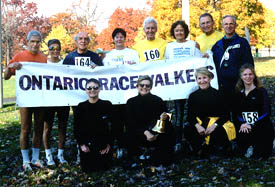